Indiana, PA (September 13, 2021) – Patti Dasta and Britney Zacherl were both named as winners of the Pennsylvania Bankers Association’s (PA Bankers’) inaugural Future Under 40 Awards. The Future Under 40 Awards honor banking industry leaders, aged 40 and younger, who have made a tremendous impact in their institution, the community and the industry. 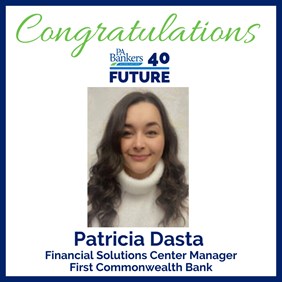 Patti, with nearly nine years of service at First Commonwealth, is the manager of the Bank’s DuBois offices at DuBois Mall and on North Main Street. Britney, with three years of service, is an Area Manager for the Bank’s Westmoreland region and is based out of Greensburg.

As detailed in their respective nominations, both young women are leaders within First Commonwealth and in their communities.

Patti has a distinct passion for helping her peers develop their knowledge, as well as identifying and achieving career goals. She has also been a mentor to young women in the community through leadership programs and has also volunteered at a therapeutic equestrian facility assisting wounded veterans and those suffering from mental and physical challenges. 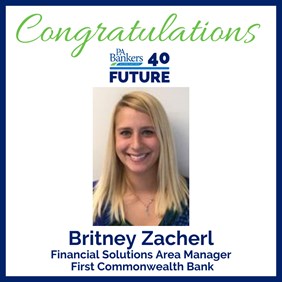 Britney has quickly risen through the ranks at First Commonwealth due to a strong record of performance, exemplary leadership principles and being a tireless advocate for small businesses. She is involved in a wide variety of volunteer organizations assisting food banks, animal humane efforts and environmental stewardship efforts.

“We are very proud of Patti and Britney’s leadership at First Commonwealth and in their communities,” offered EVP/Human Resources Manager Carrie Riggle. “The list includes a very esteemed group of young professionals, and we are honored to have two of the ten statewide honorees as fellow employees.” Carrie also serves on the board of directors and chair of the Professional Development Policy Committee of the PA Bankers Association.

A copy of the PA Bankers release with additional information can be found here.