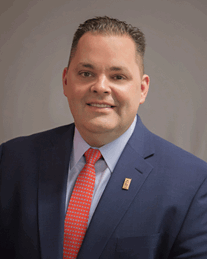 “I am very excited and feel blessed for this new opportunity and look forward to the continued growth across Cleveland, Canton, Akron, Youngstown and all of Northern Ohio,” Matt said.

In this regional leadership capacity, Matt will lead First Commonwealth’s commercial banking team in the region, and also work closely with the bank’s 11 retail locations, as well as its wealth and insurance groups. Matt will be based out of First Commonwealth’s Cleveland business center located at 1100 Superior Avenue.

Matt joined First Commonwealth Bank in 2009 and has held leadership positions on the retail and business banking teams. In his most recent role as senior corporate banker, Matt has been a top producer and commercial team lead in Northern Ohio.

“Matt is a terrific person, banker and natural leader. We are lucky to have him.” said Jane Grebenc, First Commonwealth Bank President. “He loves to win, and he loves to help his team and his customers win.”

Matt is a graduate of Southern Methodist University’s Cox School of Business Graduate Commercial Lending School and the University of Pennsylvania’s Wharton American Banking Association Graduate School of Banking. Matt, and his wife, Carrie, have six children and reside in Montville Township.