Columbus, OH (October 22, 2021) – First Commonwealth Bank recently announced Corey Coker, has been hired as a Corporate Banker, joining the Central Ohio commercial lending team. In this role, Corey will be responsible for business development and relationship management of new business clients in Central Ohio.  Corey, a native of Akron, relocated to Columbus to attend The Ohio State University. After graduating, Corey worked in the public sector in underserved communities where he taught financial literacy and employment readiness. Corey’s intense level of passion led him to engage companies within the private sector that wanted to make a difference in these underserved communities. These corporate engagement initiatives led Corey to banking and he obtained a Licensed Banking position with JPMorgan Chase. During his time there he served in Consumer, Business, and Wealth Management Banking. 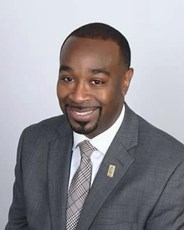 After seven years with JPMorgan Chase, Corey was recruited by US Bank to spearhead their new initiative to integrate Wealth Banker and Financial Advisor partnerships within their firm. For over six years Corey served as the Wealth Management Banker in the Columbus and Greater Columbus market, Corey played an instrumental role in the growth of the wealth and business banking programs as he assisted with recruitment and development of additional wealth teams to help with the company’s initiatives.

Adam Hansberry, SVP and Senior Corporate Banker for First Commonwealth, spoke of Corey’s appointment to the position. “Corey’s extensive track record will serve us well in working with our business clients. His hire supports our investment in being the ‘best bank for business’ here in Central Ohio.”

Corey is recognized in his community as a financial professional and prides himself on being a resource for anyone that can benefit from his knowledge or contacts. Corey volunteers with several non-profit organizations and is an active member of his Fraternity the Free and Accepted Masons where he previously served as a Grand Lodge Officer. Corey resides in Westerville, with his wife Kimberly and his teenage son C.J.  In his spare time, he enjoys watching his Buckeyes, traveling, and spending time with his family and friends.