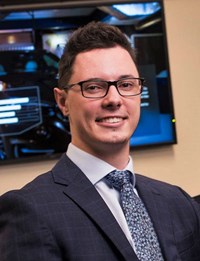 In his new role with First Commonwealth, Robert will devise, implement, and continually evaluate the investment strategies of current client portfolios and assist wealth partners with, and at times lead, the client relationship management duties for the Wealth Service team. He will also assist with the evaluation of economic conditions and the construction of the broad investment strategy and asset allocation decisions of the Wealth Service unit.

Before joining PNC, Robert graduated from Indiana University of Pennsylvania with a Bachelor’s of Science degree in Finance and Legal Studies, and a concentration in Applied Econometrics. He is a published author in the International Journal of Economics and Finance for his work in hedge fund research. While at IUP, Robert was also the Chief Investment Officer for the Student Managed Investment Portfolio, responsible for managing University assets of more than $1 million dollars. He now guest lectures to finance students on a per semester basis.

Robert will be based out of First Commonwealth’s Union Trust office in downtown Pittsburgh. He is a Pittsburgh native now living in South Side. Robert sits on the IUP College of Business Advisory Council and enjoys boxing in his spare time.