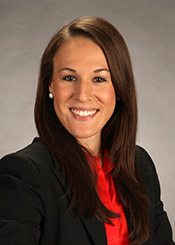 Welsch joins First Commonwealth Bank with nearly eight years of experience in the Pittsburgh market as a Senior Associate at HFF, L.P, a national real estate capital markets intermediary. During her tenure there, Brandi handled a wide range of financial responsibilities that included sourcing and closing more than $4 billion in Debt and Investment Advisory transactions, inclusive of national accounts. Brandi will be based out of the Frick Building at 437 Grant Street in downtown Pittsburgh.

Welsch holds both a Bachelors of Business Administration and a Masters of Real Estate Development and Urbanism degree from the University of Miami in Coral Gables, Florida. She is also actively involved in the community with the Urban Land Institute, International Council of Shopping Centers, Junior League of Pittsburgh, and as an advisory volunteer at Carnegie Mellon University.