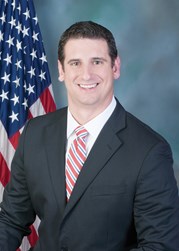 Reed will join First Commonwealth as he wraps up his eighth term as a State Representative, representing the 62nd Legislative District in Indiana County since 2003.

In the position of Regional President, Reed will serve as a driving force of teamwork and collaboration within Indiana and the surrounding communities to cultivate relationships for the purpose of business development and industry advocacy.

Reed’s proven leadership and intimate understanding of the economic landscape of Western and Central Pennsylvania make him the ideal candidate for a regional leadership role, according to First Commonwealth CEO Mike Price.

“Dave is deeply invested in Western and Central Pennsylvania with a remarkable commitment to the economy, the issues, and the people,” Price said. “His accomplishments both within the 62nd District and from the House floor as the Majority Leader will have a lasting impact on our communities. Dave is a model leader to serve as a primary business development catalyst throughout the region, and we’re privileged to have him join the First Commonwealth team.”

“As the next chapter in my life is about to begin, it was important to me to be able to stay involved in the economic future of our state and our region,” Reed said. “Headquartered in Indiana County, First Commonwealth Bank has grown into a multi-state financial powerhouse, and I’m looking forward to helping grow the bank and the communities it serves. I’m excited and grateful for the opportunity to be part of the future of this fine institution.”