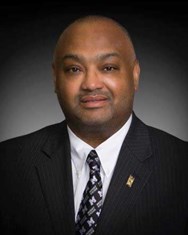 “We are excited to welcome Reggie and his leadership in the community development space to First Commonwealth Bank,” stated Evan Zuverink, CRA Officer for First Commonwealth. “We are very proud of the work we do in making our communities great places to live and work and bringing Reggie on board will help us in continuing that upward trajectory.”

Reggie graduated from Mount Union College with a Business Administration degree and minor in Sociology and has an MBA from DeVry University. He is the Chairman of CompDrug’s Board of Directors and also is a Board Emeritus and Treasurer of the Economic Community Development Institute.  Reggie is also involved with the Franklin County Save our Homes Taskforce, Junior Achievement of Central Ohio, and both the Boy and Girl Scouts of America. Reggie has received numerous awards over his career, namely a graduate of Leadership Ohio Class IV and the United Way’s Project Diversity Class XI and also recognized by Who’s Who Columbus and a Columbus Business First “40 under 40” awardee. Reggie resides in Blacklick with his family.