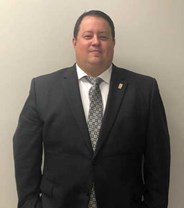 “William has a strong track record of performance, leadership and helping banking customers in their specific banking need,” stated Feras Alkhattar, Financial Solutions Area Manager in Central Ohio for First Commonwealth. “I’m excited to have him join and lead our West Central team.”

In his role as manager of the West Central office, William will lead the effort in building new customer relationships and expanding current relationships to support customer needs in full-service banking, wealth, insurance and trust services.

“I know First Commonwealth is a community leader and well integrated all across Delaware County,” said Newell. “I look forward to meeting and serving the personal and business banking customers in the area.”

William resides in Columbus and a graduate of Miami University (OH) with a Bachelor’s Degree in English Literature and Psychology. William has been active in Diversity & Inclusion programs since he began his banking career.