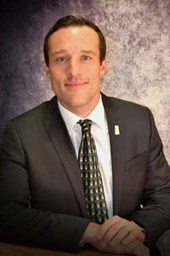 In his role as manager of the Clearfield office, Alec will lead the effort in building new customer relationships and expanding current relationships to support customer needs in full-service banking, wealth, insurance and trust services.

“First Commonwealth Bank has a strong history of serving the personal and business banking customers in Clearfield,” said Starr. “With First Commonwealth’s recent recognition by Forbes as one of the World’s Best Banks for four consecutive years, this is a great opportunity.”

Alec is a graduate of Penn State University with a Bachelor of Science degree in Business. He resides in Clearfield with his wife and their two children. He is the treasurer of the Clearfield Chamber of Commerce.