Canton, OH (March 31, 2022) – Dan Stephenson has recently been named Manager at First Commonwealth Bank’s Louisville community office, located at 308 East Gorgas Street, Louisville, OH 44641. Dan has more than 18 years of banking experience in a variety of roles and has held similar positions with both Citizens and PNC banks. 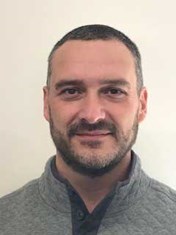 “Dan brings award-winning banking experience and leadership to First Commonwealth Bank,” stated Timothy Evans, Financial Solutions Area Manager for Northern Ohio.  “We are excited to have him join our team and serve the personal and business banking customers of Louisville.”

In his role as the manager of the Louisville office, Dan leads the efforts in building new customer relationships and expanding current relationships to support customer needs with business and personal banking, wealth, insurance and trust services.

Dan was born and raised in Columbus and attended Columbus State where he was a collegiate athlete. He resides in Canton with his wife, Mindy, where he is involved with adult kickball, 3D design/print and restores pinball machines.