Indiana, PA (August 1, 2022) – Jennifer Wiedeburg has recently been hired by First Commonwealth Bank to the position of Area Manager for the Cambria/Somerset region. As an Area Manager, Jennifer will lead the ten retail branch teams in the two county area, which includes offices in Ebensburg, Johnstown and Somerset. Jennifer joins First Commonwealth after most recently serving in a similar role with Citizens Bank for the past eight years. 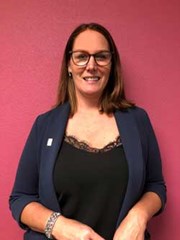 Jennifer and her husband, Eric, reside in Latrobe, where they have raised five children.  She is a graduate of Derry High School and also attended University of Pittsburgh, Greensburg campus. In addition to cheering on her sons’ baseball teams, Jennifer is an active member and volunteer of the Youngstown Volunteer Fire Department.