Indiana, PA (April 8) – First Commonwealth Bank’s Retail Executive Vice President, Joe Culos was recently presented with the Employer Support of the Guard and Reserve’s (ESGR) Patriotic Employer Award. The award is given to employers who provide extraordinary support for employees who are called into active duty service.

Senior Airman Joshua Nies, a now former First Commonwealth Bank community office manager in Lawrence County who was put on active orders in February of 2020, nominated Culos for the award due to the continuation of his benefits & compensation package, as well as the assurance his position would be held for him upon his return.

Senior Airman Nies, formerly assigned to the 910th Support Group based at nearby Youngstown Air Reserve Station, Ohio, wasn’t able to attend due to a military relocation out of state, but submitted the following statement, “It was an absolute pleasure working for a company that supported me. It’s one thing to have an employer that understands and stands by the military commitment but to have an employer that went above and beyond to support my military career…I couldn’t be more thankful.”

“While this award was presented to me, it was truly a team effort here at First Commonwealth,” offered Culos. “From our human resources team, to fellow employees in the market who stepped up during Joshua’s active service, I’m honored to accept this award on behalf of the entire bank. We were honored to make a small sacrifice while Joshua made such a large sacrifice on behalf of our country,” Culos added.

“The 910th appreciates the efforts First Commonwealth made to go above and beyond for Senior Airman Nies during his deployment,” said Senior Master Sgt. Bob Barko Jr., 910th Airlift Wing Public Affairs Superintendent. “I am honored to step up and present this ESGR award on his behalf and I highly encourage all of our Reserve Citizen Airmen to make the effort to nominate their employers for this award. After all, our team can’t achieve our mission without the community, especially the employers who make their own sacrifices to support their employees who are also Air Force Reservists.” 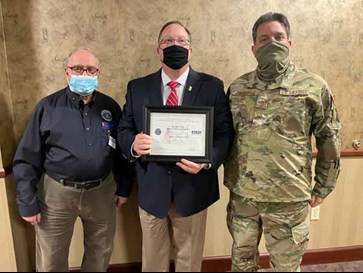