Indiana, PA (September 29, 2021) – Feras Alkhattar has recently been promoted to the position of Area Manager for First Commonwealth’s Central Ohio retail market. Feras joins the Central Ohio team after successfully serving a similar position for the bank in the Pittsburgh market. In this role, Feras will focus on executing the bank’s consumer and small business sales strategies at the ten First Commonwealth offices in the area.

“I’m very excited to be relocating to central Ohio and the opportunity this presents,” Feras offered. “I look forward to working with our team serving customers at our ten retail locations.”

Additionally, First Commonwealth is announcing the hiring of Michael Yoxtheimer as manager of their Downtown Delaware office located at 41 North Sandusky Street, Delaware, OH 43015. Michael is joining First Commonwealth after serving as a Senior Branch Manager with Premier Bank (Dublin, OH). Before that, he held a similar role with PNC Bank. 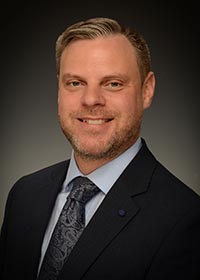 In his role as the manager of the Downtown Delaware office, Michael leads the efforts in creating great customer experiences and building meaningful customer relationships to help customers with their financial needs through business and personal banking, wealth, insurance and trust services.

Feras joined First Commonwealth in 2016 and served as a community office manager until his promotion to Area Manager for the Pittsburgh market earlier this year. He is a 2004 graduate of California University of PA with a Bachelor’s Degree in Management Information Systems.

Michael is a 2006 graduate of The Ohio State University (OSU) with a bachelor’s degree in Human Ecology. He is the secretary and treasurer of AmSpirit Pulsar Chapter Networking Group. Michael is an avid bowler and a fan of all OSU and Cleveland sports teams. He resides in Lewis Center.