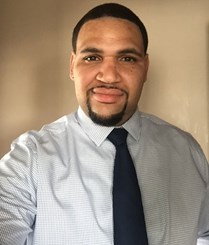 “We are excited to welcome Jason to First Commonwealth Bank, and we look forward to him assisting the small business and personal banking customers in Natrona Heights and Allegheny Valley,” stated Adam Dick, Financial Solutions Regional Leader. “Jason is well known locally as a standout on the football field, but he’s also a superstar in the financial industry,” Adam added.

In his role as the manager of the Natrona Heights office, Jason leads the efforts in building new customer relationships and expanding current relationships to support customer needs in full-service banking, wealth, insurance and trust services.

“I’m really looking forward to working in my hometown and serving my friends and neighbors,” Booker said. “With First Commonwealth’s investment of a new office here in Natrona Heights, this was an opportunity I couldn’t miss out on,” he added.

Jason is a graduate of Highlands High School, where he starred on the varsity football team currently serves as an assistant coach. He also graduated with an associate’s degree from Erie Community College in Orchard Park, New York. Jason played semiprofessional football for eight years with the Pittsburgh Pride. He resides in Natrona Heights with his wife and three children.