September 2019:
"Whoever Exalts Himself Shall Be Humbled"

A Look Back - 3rd Quarter 2019
The rest of the biblical passage from the book of Matthew goes, “and whoever humbles himself shall be exalted.” I had the pleasure of attending my granddaughter’s baptism recently and the above passage was the central theme of the preceding service. It brought to mind the parallels between everyday life and financial markets that we deal with every day. With over three decades in this business, I have seen many instances where very smart people thought they had it all figured out...they knew the top or bottom was in, or a particular asset class was going to dramatically over/underperform. Bets were placed and the resulting disappointment was almost predictable. They were humbled.

As I reflected on the fate of the exalted, I thought back to the importance of having a “humble”, thoughtful diversified portfolio that strategically rebalances when appropriate. No big bets. No top or bottom calls in the markets. Those that stay in the asset allocation appropriate for their particular risk appetite are generally rewarded with healthy long-term performance. The chart of the S&P 500 below shows just how good a place that has been to be over the last 10 years or so. At the end of September we were up over 340% in price movement alone since the painful low of March 2009. The slope of that upward sloping line is a fairly steep one, and it does raise one important question: How long can this ride continue?

Perhaps even more impressive than the longer term run has been what has taken place in 2019. The broad-based index was up over 20.5% in the first nine months. Although most of the upside was generated in the first four months of the year, it still is quite amazing given the many potential negatives that we have faced. The length of the expansion has already been mentioned and the higher overall valuations associated with it. We also have a Fed that has reversed its rate-increasing path of nearly three years to one of rate cuts…the most recent coming on October 31st. The ongoing trade war with China has weighed heavily at times, both generally and with some specific industries where the increased tariffs have cut into profit margins. Manufacturing growth has slowed considerably, as the PMI (Purchasing Managers Index) fell below 50 in August, which historically has been a recessionary alert. It was later revised to slightly above 50.

With all of the headwinds, the overall domestic economy has been remarkably resilient. The dashboard below highlights some major data points. Overall market volatility remains fairly low. Inflation has been surprisingly tame, while unemployment continues to be historically low. In fact, the jobs numbers for October were just released and handily beat expectations. The U.S. economy added 128,000 jobs in October, which was well above the consensus estimate of 75,000. It should be noted that this optimistic employment number came despite a decline of 42,000 jobs in the auto sector due to the General Motors strike. As we have noted before, there were also some hefty revisions to prior reports. The August Jobs growth was revised to 219,000 from 168,000 and the September number was revised up to 180,000 from 136,000. Those are significant revisions that may have very well had a more favorable effect on markets at the time when they were released. 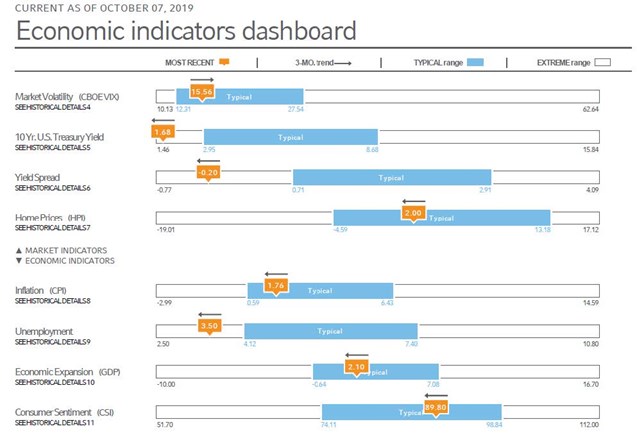 One of the bellwether indicators for how our overall economy is doing, the Gross Domestic Product (GDP), was also released recently and showed positive, albeit slower growth, coming in at 1.9% for the third quarter after an anemic 2.0% report for the second quarter. Ideally, economists and our political leaders would like to see that number over 3%. The actual unemployment rate fell to 3.5% in September, matching the lowest level reported since 1969…or 50 years ago. April of 2018 marked the first time in over two decades that there were more job openings than people looking for jobs and that ratio has held true for the last year and a half. Odds are that if you are looking for a job in the U.S. today, you can find one.

The Asset Class Returns table below clearly shows what a healthy year it has been so far across a variety of asset classes. Real Estate, as illustrated by REITs, continues to show the way, up 28.5% through September. We always share with clients that over very long periods of time…25-30 years…many of the equity asset classes start to approach each other in terms of annualized performance. However, over shorter 1-3 year time frames the results can be substantially different, which is why having a thoughtful, diversified asset allocation approach is so important. We see that this year, as domestic equities have significantly outperformed their International and Emerging Market counterparts. We see that phenomenon played out in this colorful chart as yesterday’s losers are often tomorrow’s winners and vice versa. It was only last year that the safety of Cash was the best performer of all. 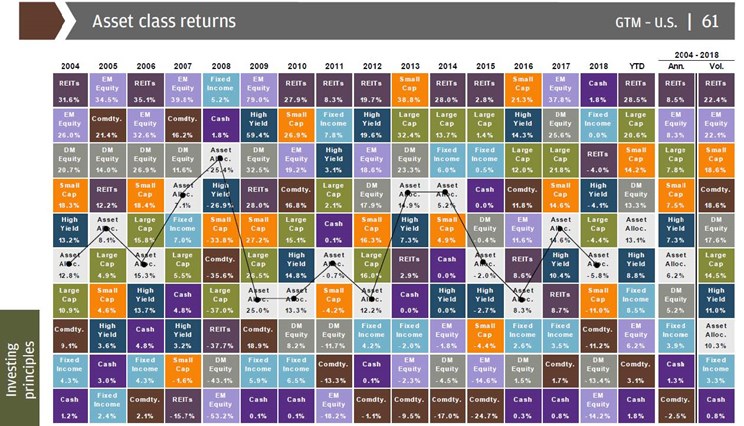 We have covered how the exalted get humbled in the markets, but how exactly does the reverse happen? In our opinion, it comes with a disciplined, consistent approach to investing. It may not always be the most exciting thing to talk about at cocktail parties, but it works over time. It is important to avoid the “herd” mentality and not get too excited at new market highs, or too afraid when markets dip. Be the tortoise and inch forward, with diligence and patience. We remind readers now, as the S&P 500 made new all-time highs in October, to add to this 11 year market run. We do believe that there is likely to be some increased volatility in markets as we navigate the many potential hurdles that are always out there. The tide will almost assuredly change, as it always does, but the big unknown is…when? Even with a couple of the recessionary alarms having sounded recently (the 2/10 year treasury yield inversion, Manufacturing falling) there is no way to predict the potential timing of a true recession or corresponding market retreat. Perhaps as importantly, they tell us little about the potential severity of a setback. For those that would have bailed on their investment approach at the end of 2018 after an awful December and fourth quarter, the outsized returns of this year would have been missed. We should continue to look at our overall risk level and make sure it is appropriate for where we are in life…more aggressive as we start out in the workforce and less so as we near retirement. And through it all, we must stay invested. We take advantage of market moves to rebalance back to our objectives. We “de-risk” around the edges with the knowledge that a dollar saved is just as important as a dollar earned.

We end with a couple of charts that tell a very different story. If you were looking for something to give you pause, the dichotomy of these two graphs just might do it. They tell a very different story about the confidence of the consumer and corporate CEOs. The first confirms what the most recent GDP release indicates. The consumer, in large part, is really driving this economy. In the quarter, the increase in consumer spending reflected increases in both goods (recreational goods and vehicles, as well as food and beverages) and services. The latest release of the Michigan Consumer Sentiment Survey rose to a three month high of 96, beating consensus expectations, and remains near record levels. 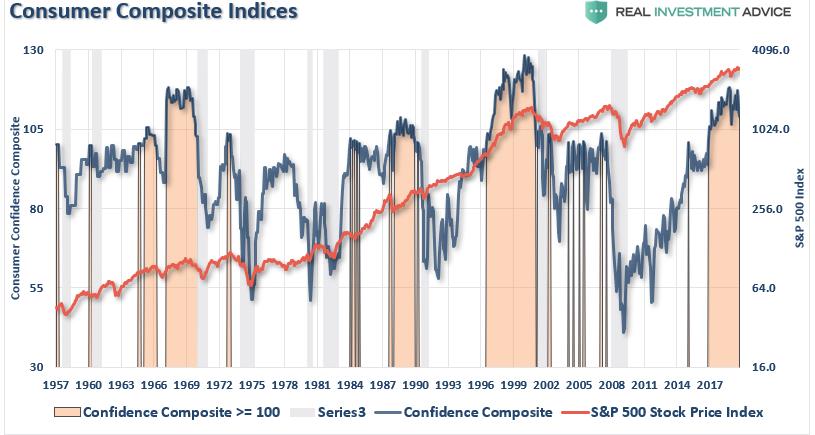 Conversely, CEO confidence in the economy is near record lows. You typically don’t see this level of disparity between positive consumer sentiment and negative business confidence. Something has to give. As you look further into the numbers, CEO confidence has historically led the consumer by a wide margin. This can lure bullish investors and the media into believing that CEOs really don’t know what they are doing. Unfortunately, the confidence of the consumer tends to crash as it catches up with what CEOs were already telling them.

As we head into the last couple of months of 2019, we continue to keep a cautious eye on the markets, believing that at heightened valuations and slowing global growth some additional risk is present. However, things are kind of okay right now. The U.S. is still the place to be from many investment perspectives and many big companies are still printing money, even with the big cloud of the U.S./China trade war. As we navigate the winding investment pathway, we will remain humble…and take any exaltation…