One of the most popular, American, patriotic songs of all-time, America the Beautiful, has been performed by almost every major recording artist over the last 100 years. The lyrics were written by poet Katherine Lee Bates in the late 1880’s and the music was composed by Samuel Ward and first released in 1910. Ward actually died in 1903, not knowing what a national treasure the song would become. Probably the most popular version of the song, and my personal favorite, was recorded by Ray Charles and released in 1976 as part of the country’s bicentennial celebration. It is nearly impossible to listen to without stirring some sort of emotion. It is with this backdrop that we recently celebrated another Independence Day here in America and what that has come to mean over the years. Our history as a young country is certainly not without trials and tribulations…both internally and abroad…but the beauty of those words and melody remind us all of the freedoms that we enjoy, and the expectations we should all have to keep this country great! As it turns out, the United States has also been the place to be from an investment standpoint for several years. That theme continued in the first half of the year as shown in the table above.

The S&P 500 continued its historic run in the first six months of 2021, delivering a 15.25% return, while International Developed and Emerging Markets stocks returned, 8.83% and 7.45%, respectively. Core Fixed Income bounced back in June and the 2nd quarter and is now down only -1.60% YTD, after posting a -3.4% return in the 1st quarter. Alternative asset classes have shown the importance of diversity in the first half of 2021. Commodities and Real Estate, in particular, continued their resurgence after years of underperformance. Cash or short-term money markets continue to offer virtually nothing to investors. The current national average for a typical money market account is below .05%. At that rate, $100,000 would return $50 to an investor over the course of a year…enough for a fast food lunch…maybe. It is still one of the important reasons that stocks have performed so well over the last 18 months in the face of so many uncertainties with the Coronavirus and the resulting economic impacts. It is certainly a behavioral finance study question, but the empirical evidence is clear. Most people just can’t stomach earning nothing on their money. It just does not sit well and goes against everything that they had become conditioned to expect. The result has been that money traditionally in “safer” asset classes is making its way into stocks and other assets that have a promise of some higher return. Historically, that tends to be good…until it isn’t.

The chart below shows just how dramatic the rally has been over the last 15 months, since we made the pandemic low on March 23, 2020. As of the end of June, the S&P 500 was up over 92% from that low! That includes all of the economic stops and starts, the Covid uncertainties and case surges, the lost jobs, etc. We have often written about the incredible resiliency of our markets over the years, but it has never been so fully on display as the last 15 months. From a longer-term perspective, the rate of ascent had already been historically high since the Great Recession time frame of 2007-2009. The S&P 500 had rallied 401% as of February 2020, when the large-cap index made an all-time high before the news of the Coronavirus started to dominate headlines and economies. Even after the steep market decline in February and March of 2021, the index made up all losses and then some. As of end of June 2021, the S&P 500 sat at nearly 4300, or almost 100 points higher than the previous all-time level set right before the pandemic news in 2020. The numbers really are quite amazing when viewed in this context.

The next chart shows just how dominant the U.S. has been over the last decade plus. Both the length of time (nearly 14 years) and the magnitude of outperformance versus International stocks (nearly 240%) has been impressive and rewarding to those backing the Stars & Stripes. However, there is a reason that this chart is titled “Cycles”. Things tend to change. That is a good lead-in to what we see going forward.

It is always precarious trying to read the tea leaves, and it seems no less difficult today. Many economic indicators either look just fine or are improving. Although not at pre-pandemic levels, more and more people are working. We are still around 6 million jobs short of where we stood in March of last year. Inflation is the latest concern as people are chomping at the bit for a return to normalcy. We see it with our own eyes. People are out and about…going to restaurants…traveling for vacation…and most of the things that we all enjoyed two summers ago. Some businesses actually reinvented themselves and thrived during the pandemic and others found a way to survive and create efficiencies, while many others were just not built to withstand the prolonged economic heat that affected us all. We show what has happened in the past because in many cases it is our best guide to what we may see in the future. As we have written before, in the investment world, outperformance typically leads to underperformance and vice versa. The tricky thing is we never really know when the shift is going to start exactly. In fact, bubbles, as we saw in the Dot-com era and then again in the housing markets leading up to the Great Recession, exist because people engage in some kind of excess. It may be bidding up prices of stocks beyond reasonable expectations, or lending money to home buyers with little regard for their ability pay back the loan, but the idea is the same. Like the old saying goes, “too much of anything is usually not so good.” With that in mind, we turn to asset class return table below. 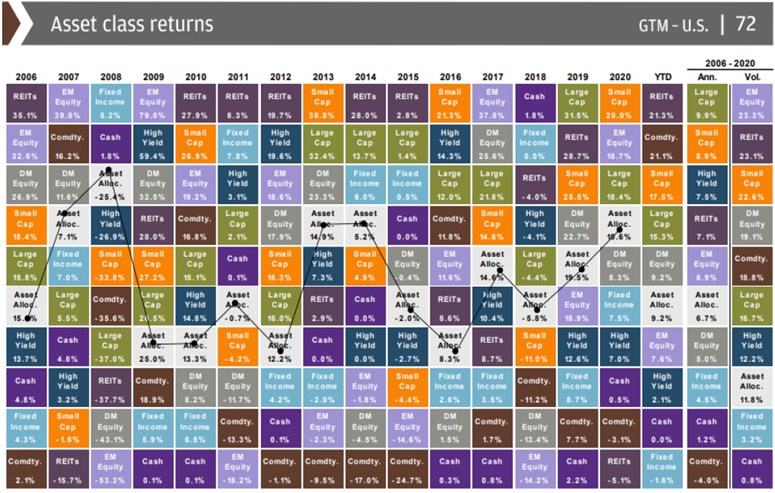 We remain optimistic about the future and all of the advances we are seeing in health care and technology in general. It does seem like necessity has bred creativity and invention. We also believe that we will continue to see the colors change in the chart above. Yesterday’s losers will win again. It was not that long ago, in 2018, that cash was the best performing asset class! Domestic stocks have been the best place to be for nearly a decade and that run can certainly continue, but having some exposure to international equities and other alternative asset classes may prove to be beneficial as we unwind ourselves from one of the biggest challenges of our lifetime. We celebrate all of the accomplishments we have made as a country and believe in the ability of our people to come together as we keep America Beautiful.