The above quote is attributed to Mark Twain from his 1897 book, Following the Equator: A Journey Around the World. The full quote is “truth is stranger than fiction, but it is because fiction is obliged to stick to possibilities: Truth isn’t.” We all have had situations in our lives where we felt that if we hadn’t seen something with our own eyes, we would never have believed it. An unbelievable sporting achievement, a chance happening in nature, or an extraordinary accomplishment of the human mind all fit in that category. What we and the rest of the world have gone through and seen over the last several months may very well be included this time. We are still in the throes of a global pandemic that over 99% of the current population has never seen before. The 1918 (Spanish Flu) was the most recent comparable virus to affect us so globally. In an effort to fight the spread, economies around the world were essentially shut down for months. The pictures of a barren street in midtown Manhattan during the middle of a workweek stand out as something so far from the norm. What has become fairly standard fare would have been nearly impossible to imagine back in mid-February. It was at that point that the S&P 500, and other stock indices around the world, made all-time record highs. 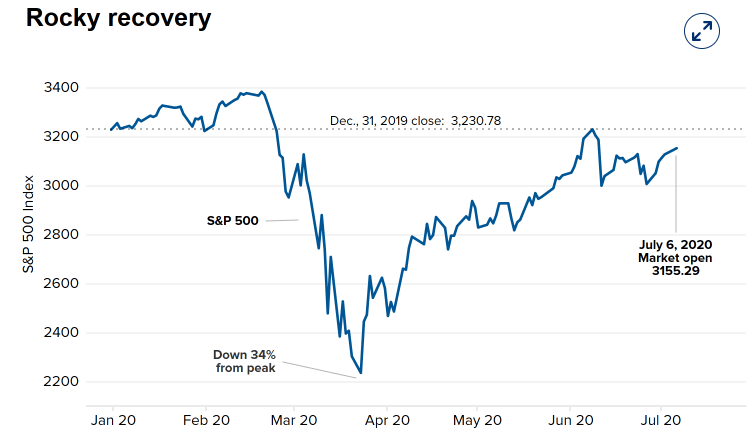 The retreat from late February to March was swift and sudden, as the index lost 34% of its value. As the full scope of the impact that the Coronavirus would have around the world set in, economies shut down and many industries shuttered their doors. As the chart above illustrates, however, equity markets have rebounded in an almost stranger than fiction way. Against the backdrop of nearly 20% unemployment, negative GDP, slashed corporate earnings and other weakened economic releases, the S&P 500 has rallied more than 40% from those March lows. At one point in mid-June, the index was actually positive from the December 31st, 2019 close of 3230. The 2nd quarter performance represents the best we have seen since 1998. Fixed Income markets have provided the type of diversifying return counted on in these difficult times as the Bloomberg Barclays Aggregate is up over 6% for the half-year.

After feeling like substantial progress had been made in slowing the spread of the virus, most countries, including the United States, started to slowly re-open their economies in late April and May. It was that hope, along with some promising news on therapeutic drugs that dealt with the severity of Covid-19 symptoms which seemed to signal that the worst may be behind us. Potential vaccines also have reported positive early-stage results that contributed to a better-case scenario. Some of that wind-behind-the-sail has dissipated in the last couple of weeks as new Covid-19 infections have spiked around the globe, and specifically here in the U.S. Many states have had to either postpone reopening plans or revert to prior partial shutdowns to deal with the uptick in cases. We will not attempt to lay out all of the potential health related scenarios that may develop over the next several months, as there are many…but the willingness of individuals to do their part to stem the tide of this global pandemic will no doubt play a pivotal role in how we progress. In addition, the advances in health care remedies with our smartest scientists and doctors working on a common cause are nearly impossible to predict. Based on the sheer magnitude of the focused effort…we are encouraged, though.

Perhaps not in most of our lifetimes has the immediate future ahead been fraught with so many unknowns. It is, therefore even more important to show the chart below for proper perspective. Though there are the unknowns from an economic, market, and certainly a personal point of view: we have faced these types of situations that raise the collective anxiety meter in the past. In each event, the way forward seemed difficult to imagine in the moment. As a united people, we persevered and moved forward through those uncertain times, and through the prism of time those events did not deter the advancements of our global economy and, indeed the steady upward march of our markets. 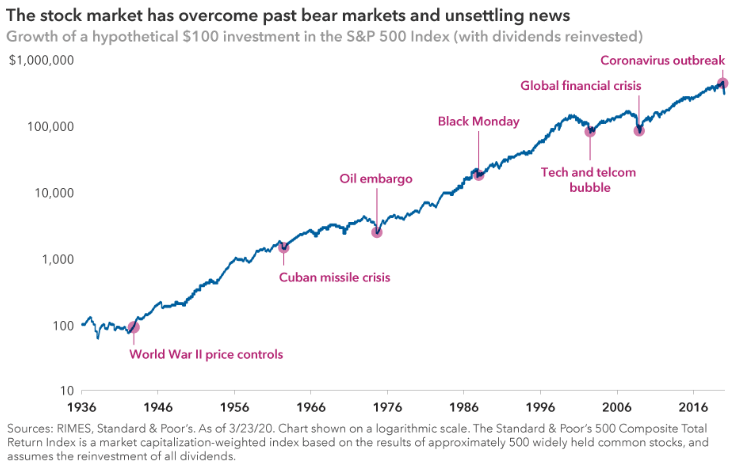 We do believe that the longer-term prognosis for our economy and the markets will fit in the above chart with the benefit of 20/20 hindsight. The more immediate picture is understandably cloudier, however. Many pundits have commented on the seeming disconnect between some of the more dire economic numbers released over the last several months and the robust rally seen in stock markets. With the understanding that markets tend to be more forward looking, a case could be made that if the worst was behind us from an economic standpoint that markets could resume their record assault on new index highs last seen in February. We do not discount that driver, but believe it may be premature. The damage to many service industries like restaurants and travel/leisure has been severe. It is clear that as many brand-name retailers like Brooks Brothers, Neiman Marcus, J. Crew and others have either filed for, or are contemplating filing for bankruptcy protection, some jobs may not be coming back. The retail sector has been particularly hit hard as Retail Sales tumbled 16.4% in April. Many smaller, non-chain restaurants and bars have had to permanently shut their doors as their thin margins could not withstand the prolonged shutdown…or the prospect of further restrictions. Also, the impressive bounce-back in the equity markets has not been as widespread as those looking for healthy market signals would like to see. Big-Cap tech stocks have really led the way. In fact, the new acronym of FAANM has accounted for a disproportionate share of the rally. 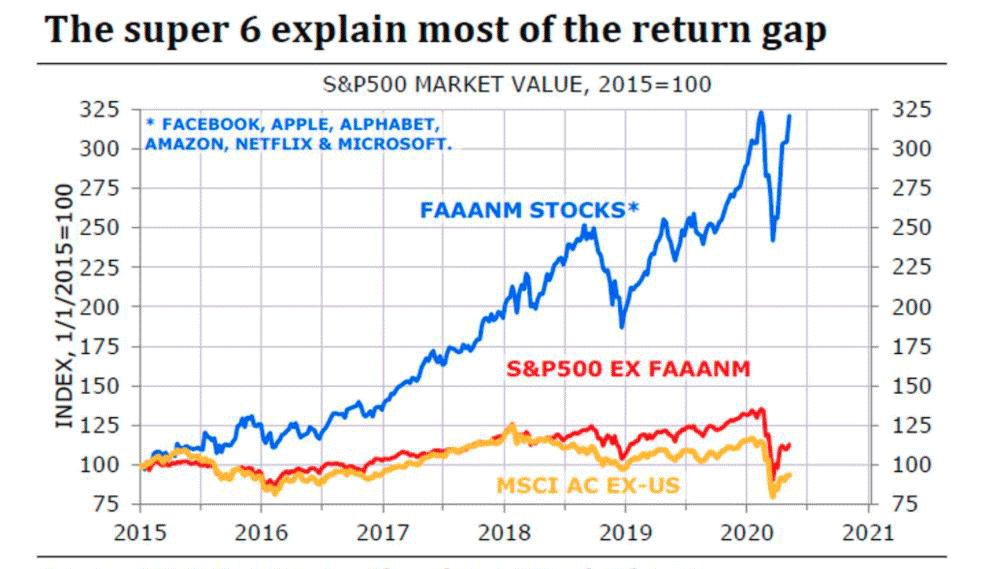 The six stocks that make up FAAANM are Facebook, Apple, Alphabet (Google), Amazon, Netflix and Microsoft. They account for around 22% of the market capitalization of the entire S&P 500 index! As a comparison, the top six stocks accounted for around 11% a decade ago. So, why should this level of concentration worry us? Well, in the same way that we talk about the benefits of a diversified portfolio construction that strengthens the risk/return profile of our clients, the same holds true for markets as a whole. The term that market analysts use is “breadth”, or the extent to which many stocks are participating in a move. Since calendar year-end 2014, the FAAANM “six” is up over 400%, while the S&P 500 ex-FAAANM is up around 40%. It’s great when you are holding them, and not so much when you are not…thus the concerns for the lack of “breadth” seen in current markets. If those six stocks continue to roll, the index should perform well, but if they don’t…Further, if there is a period of time when investors are looking to raise cash and sell their equity positions, they typically look to sell ones that have performed the best most recently. Those six would certainly fall into that category.

We also believe that the most critical component of the market resurgence since March has been the generous open pocketbook of the Fed. The chart below shows how their balance sheet has ballooned over the last decade. Before the Great Recession timeframe of 2008-09, the Fed’s balance sheet was below $1 trillion. In what was unprecedented at the time, the group charged with keeping inflation in check, added nearly $2 trillion to help offset the crisis in confidence brought about by the sub-prime mortgage collapse. The balance sheet continued to grow over time, reaching a peak of $4.5 trillion in 2014 before leveling off and decreasing to nearly $3 trillion coming into 2020. That trend has changed abruptly in the second half of 2020, and with their balance sheet ballooning to over $7 trillion; the Fed has declared an outright war of its own on the currents threatening to disrupt our economy and markets. In its words and actions the Fed has promised “to do whatever is necessary” to stabilize markets. It is difficult to minimize that statement, and we believe that sentiment from the Fed has been one of the biggest factors in explaining the resurgence of the stock markets against the less-than-stellar backdrop of current economic conditions.

Even with the support of the Fed and the impressive performance of the FAAANM stocks, we believe it is likely that there will be some continued volatility as we work our way to an eventual election season here in the U.S. in November. It is with clear minds and optimistic hearts that we believe in seeing the eventual other side as this stranger than fiction time in our lives plays out.