The chart above is simple, but also very telling. It gives a bigger-picture history of how the index has performed over the last 25 years. It includes the ”Dot com” bust, the Great Recession low in 2009, and the more recent sharp drop at the beginning of the pandemic last year. Just as importantly it shows the remarkable rally over the last 18 months, as the stock index has nearly doubled, even with September’s 4.5% selloff. The bottom line is that it has been an extremely impressive market ride both in the short-term from the pandemic lows of last year, and from the longer term lows in 2009. 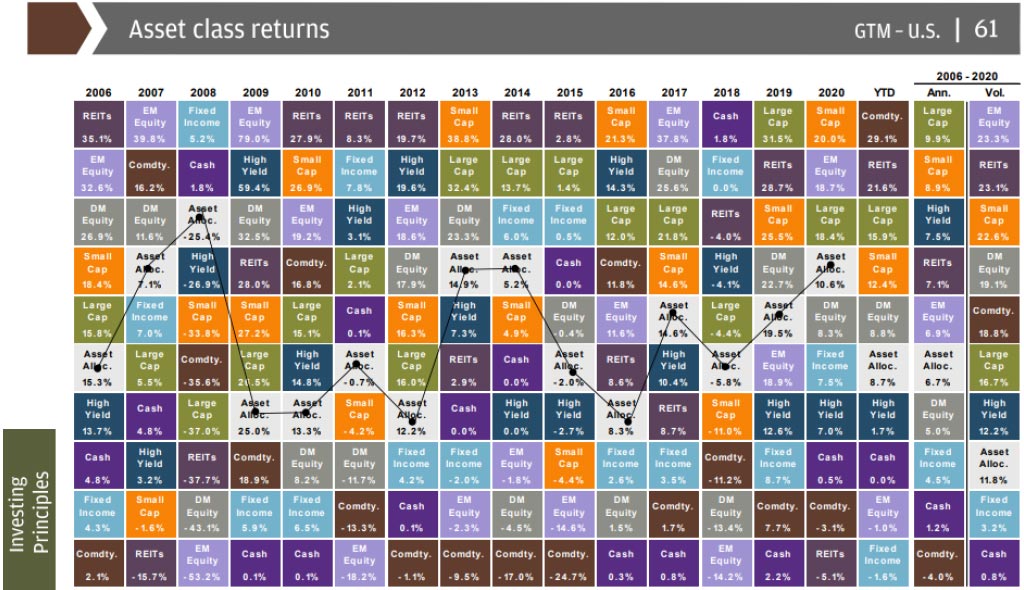 We also appreciate the table above that shows how specific asset classes have performed over time. The color coded nature of the table visually illustrates how they tend to weave in and out of favor. This year large-cap stocks continue to do well, but the big winners are commodities and real estate. Further, although Cash hovers near zero, it has done better than Emerging Market stocks and core Fixed Income. We only have to go back to 2018 to show how Cash, with a return of less than 2%, was the best performer of all. That is the truth.

Is it possible that there are more things to consider when looking ahead than there has ever been? We are not exactly sure of that answer, but we would not argue with anyone who thought there is. From a longer-term valuations standpoint, stocks look over-valued. Either slightly so or grossly so depending on who you talk to and what metrics you are looking at. The debate about whether the clear uptick in inflation is transitory or not lingers. Many small to mid-size businesses see pricing pressures lasting well into 2022. Perhaps it depends on how you define “transitory”, but many see supply chain disruptions continuing well into next year as well. The Fed has announced their intention to begin to taper their purchases that were designed to support troubled bond markets in the beginning stages of the pandemic. The worry is that this could lead to downward pressure on prices and upticks on yield that in turn leads to selling pressure in stock markets as investors find a more reasonable alternative for their cash. There is also another government stimulus infrastructure bill that is looming. It looks likely that it will be trimmed from nearly $3 trillion to only $2 trillion as it currently stands. Third quarter earnings announcements are under way and the early indications are that most companies within the S&P 500 are doing just fine…some better than others for sure, but overall the recent releases are encouraging.

So, what to do? We believe the Fed has bitten off quite a bit. It seems at times like they are a bit like Jack Nicholson’s Colonel Jessup. When describing what the Marines were doing on Guantanamo Bay, he said “you want me on that wall…you need me on that wall.” The belief that the Fed can forever cure what ills the markets is a little scary, and perhaps misguided, but we do believe that belief is out there. It is a delicate line that they walk between maintaining overall financial stability and acting as an end-all for all market risk. We have trimmed equity allocations back to neutral with an eye on increased volatility as we digest the many hurdles that exist. However, we acknowledge the possibility of sustained gains in stock markets as economies around the globe continue to adapt and recover from the pains of the pandemic.

We end with the table below. We are often asked about the overall benefit of professional money management. Other institutions have tried to quantify that number as they look at how traditional retail investors have performed over time. Below is a more detailed breakdown from Russell Investments that attempts the same. It is not surprising that the biggest component is linked to investor behavior. Indeed, it is the most important thing that we do. Take the emotion out of investing and stick to the objective of every client. It is hard to do sometimes…like March of last year…but in the end it leads to better overall performance. And that’s a truth worth handling.