"Pay for Your Raising"

I’ll never forget the timing. I was calling to tell my parents the news that my wife and I were expecting our first child in 1986. Of course, they were excited and joyful at the prospect of additional grandchildren, but it was my father who dispensed his usual brand of Hillbilly wisdom. After all of the congratulatory lines, he paused and said, "you never pay for your raising, until you raise one of your own." At the time, the words kind of bounced off me with little meaning. Four of my own kids later, I know exactly what he meant. You really can’t fully appreciate all that goes into being a parent until you experience it yourself. The sacrifices and difficult decisions are too many to count. I found myself pulling out the old line with my oldest son in speaking about his three children. I’m sure he had the same, "yeah…whatever" look. He will just have to experience it himself. We believe the same is at least somewhat true when looking at the markets. Experience and working through a variety of market environments is so beneficial. There are many lessons to be learned. Never get too high or low. Know the difference between trading and investing. Be patient and reasonable and take advantage of market swings…in either direction. Keep it simple. And it is that last one that we focus on now. Simply put, if investors are prone to take risk, and buy stocks, prices will go higher. We have seen what happens when investors want to de-risk. We witnessed the quick, substantial sell-off in a five-week period between late February and the end of March last year that saw the S&P 500 down nearly 40%.

Right now, and over the last year, investors have been prone to take on risk. Over the last five months, $576 billion has flowed into equity funds, more than the $452 billion seen in the prior 12 years combined. A combination of easing monetary policy and additional government stimulus has provided more than enough reason for markets to continue to make record highs in the face of an ongoing global pandemic. In the first quarter of 2021, the S&P 500 was up 6% and the Small-Cap Russell 2000 performed even better, up nearly 13%. Bolstered by a sharp increase in energy prices, Commodities led the way in the quarter, returning 13.55%. The chink in the asset allocation armor was core Fixed Income. The first three months of this year was a clear reminder that bonds can produce negative returns. When longer-term yields rise, as they have so far in 2021, it results in lower bond prices…and negative returns. The core benchmark, as measured by the Bloomberg Barclays Aggregate was down 1.25% in March alone, and 3.37% for the quarter. For example, the 10 year U.S. Treasury yield ended 2020 at .92%. It went as high as 1.75% in late April, and is hovering around 1.60% currently. The yield itself is still historically low, but the relative move from three months ago is substantial. Equity investors get nervous about any underlying market news that could lead to investors believing they have a real alternative to plowing money into additional stock purchases. The Fed has stated…and restated that the very short end of the yield curve should remain at or near zero for the foreseeable future. They have control of that piece of the curve. However, supply and demand determine what happens further out on the curve, and a continued rise in yields could act as a headwind for future robust equity returns.

The chart below takes a little different look at the broad S&P 500 stock index and where we have come from. It is a very long-term look, going all the way back to 1870. Big market corrections like the Great Depression, the "Dot-Com" bust and the Great Recession are somewhat muted when looking at this long of a history, but the visual is still effective. Over time, stocks tend to go up. You could run a pretty good regression line through that blue history. The 5 year annualized return history shown in red is equally compelling. While we have certainly seen 5 year periods of negative annualized returns, we have not experienced such a stretch since late 2009. Most recently, investors who entered the market at the end of 2015 would have realized a 13.89% annualized return by the end of last year. A $100,000 investment would have nearly doubled over those 5 years! 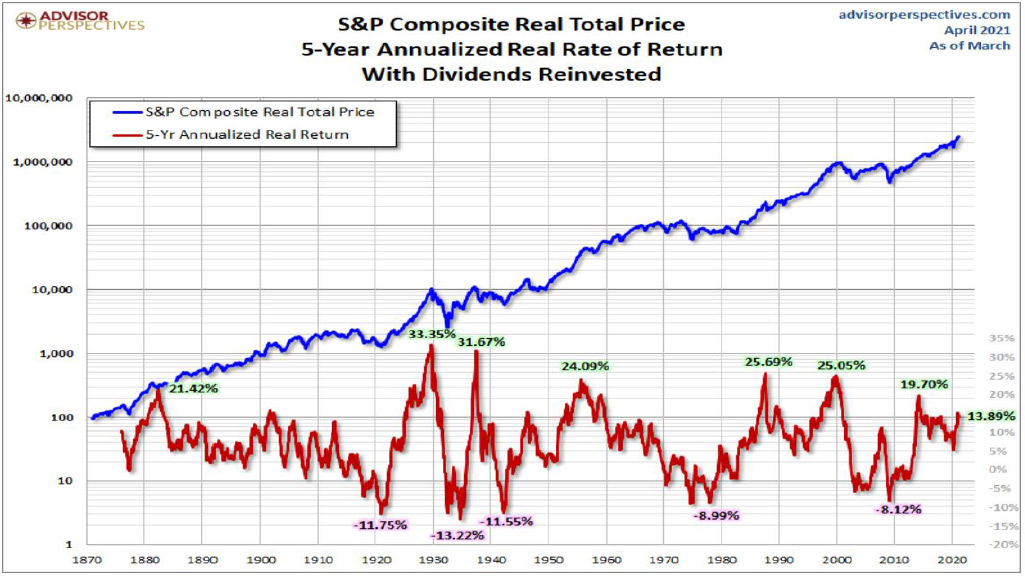 We continue look at the markets with the lens of the short term versus the long term. What that exactly means is open to debate, but we believe it appears that there are enough short-term tailwinds to be constructive on global equities. Most of the major economic indicators are now within normal ranges. Overall inflation, although worrisome, is still below the Fed’s target rate of 2-2.5%. The recent employment numbers showed improvement with the unemployment rate at 6% and over 900,000 jobs added to the workforce…far more than the 600,000 consensus number expected by many. 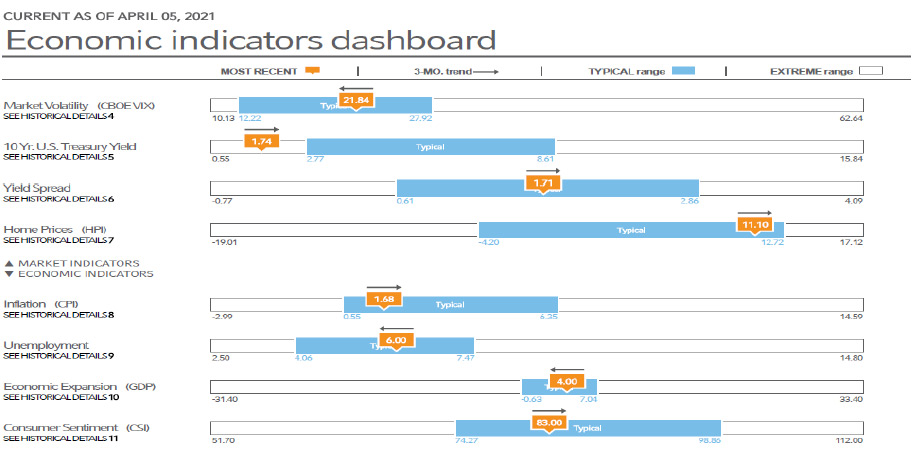 Retail sales jumped nearly 10% in the latest release, as pent up demand for goods is making its way to the cash registers. There is little question that we all want to get back to some level of normalcy. That should lead to some of the more beaten up sectors experiencing a rebound. However, these sectors may not recover at the same rate because we are not going to go and see 30 movies at the cinema to make up for the ones we missed last year…or go to a baseball game every night to replace the games already played last year. That said, the needle should move, and many have some extra stimulus money to spend that would help to heat up this economy just as the weather does the same.

In the column under things that give us pause are charts like the one below. The blue line represents the S&P 500, while the red line illustrates overall margin debt, or the amount of money an investor borrows from a broker via a margin account. Historically, when that red line gets too high it tends to act as a red flag that there might be too much leverage in the system. We just witnessed in March the precipitous collapse of Archegos Capital, reminding us of the pitfalls of being too leveraged…and wrong. Literally, a handful of stocks that went south for the family office took them from a reportedly $20 billion firm to zero in a couple of trading days, as brokers demanded more and more margin for the bad bets made. Currently, we see that the level of margin debt is high. It is higher than at any time during the dot-com bubble or the Great Recession timeframe, and yet the broad stock market continues to make new highs. This does not mean that we are heading for an immediate selloff, but it is concerning. Further, what it could mean is that if we do start to experience a normal pullback, those that are extended on credit could be forced to sell faster than they would like…which could lead to more selling, etc. 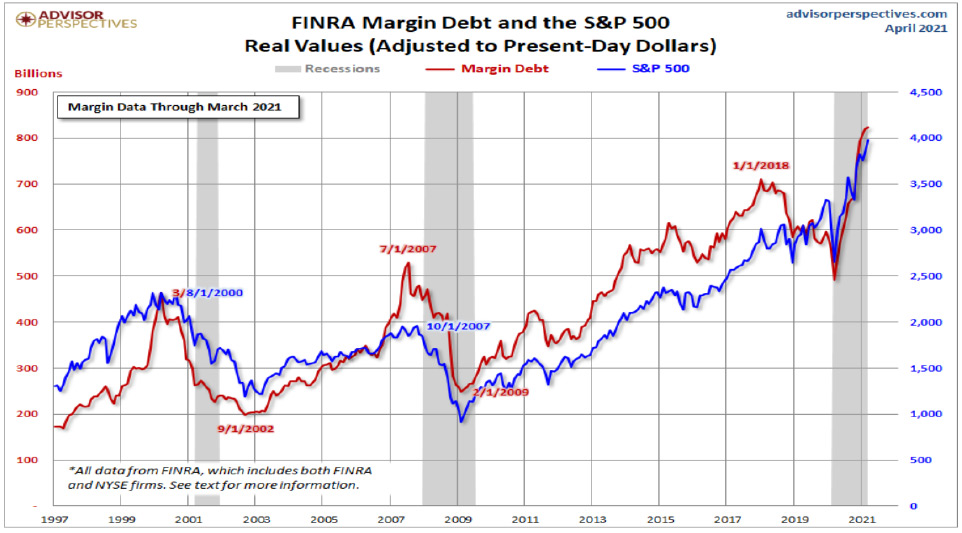 As you return to history and look at what has been the root cause of other bubbles and significant market retreats, there tends to be some form of leverage involved from individual and institutional investors alike. The thirst to make more money, or in some cases the same amount of money from tighter spreads, usually doesn’t end so well. Perhaps it is human nature to attempt to milk the last ounce of profit out of a given trade. We see companies move heaven and earth in the search for ounces of gold, and in some cases the risk ultimately was not worth the reward. We liken this scenario of systemic extended credit to what we tell our kids as they become adults and learn to manage a budget. Don’t spend what you don’t have. Only risk what you can afford to lose. We say these things because we know they have real value…and if adhered to, can help eliminate potentially bad outcomes.

Finally, we will end with a couple of charts on the much-talked-about Bitcoin. Currently there is no efficient or effective way for an investment advisor to get clients exposure to Bitcoin through traditional exchange-traded securities. Several firms are currently working on providing ETF’s (Exchange Traded Funds) to better track the underlying price move of the major cryptocurrency. Investors need to open up an account on a platform, like the recently publicly-traded Coinbase, deposit your money and off you go. One Bitcoin is currently worth around $56,000, which is up around 500% over the last six months. We believe the jury is still out on when and if the alternative currency will become a more widely used and accepted form of currency. In the end, that is what marks our current system regarding the U.S. dollar. It is widely accepted as a form of payment for goods and services. When we are able to pay for a burger at a drive-thru restaurant with Bitcoin, the digital currency will have arrived.

That doesn’t mean that the current price of Bitcoin and other digital currencies can’t go higher. They can and have. The chart below shows the history of the price move into the early part of 2021. The advance has been swift and robust over the last year. 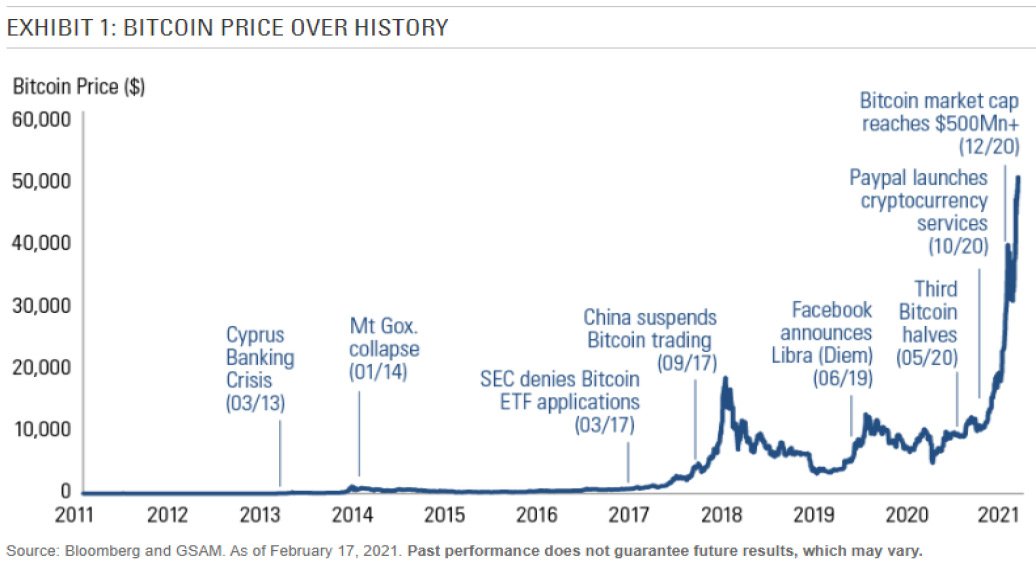 The chart below looks at how Bitcoin, as an asset class, has performed versus traditional stock and bond benchmarks during previous market selloffs. This is where some additional concerns come in. Those that believe that holding Bitcoin as a hedge against other asset classes in times of stress may end up disappointed. The last four major drawdowns shown have seen the digital currency experience the same kind of negative move, and in one case, even have more of down move than the S&P 500. Importantly, the volatility associated with Bitcoin has been extremely high.

We will continue to monitor and look for signs of potential deterioration in the anticipated economic recovery and how that affects the underlying financial markets. We will lean on the learnings of history and trim risk when appropriate and keep true to our overall asset allocation…as we attempt to properly "pay for our raising."