We Shall Overcome was originally a gospel song from the 1940’s that became a key anthem during the uncertain times of the 1950’s and 1960’s. America was dealing with large-scale issues that included the Cold War, Cuban Missile Crisis and Vietnam War. It was most famously recorded by folk singer Pete Seeger in 1948, who sang it often at times of uncertainty and especially when it seemed like many could use a reminder of how many struggles we have endured and conquered as a people. It seems more than appropriate for this time in history as America, and indeed the rest of the world battle the effects of the Covid-19 disease.

We have written often about the remarkable resilience of our economy and the financial markets. That resilience is and will be tested again. In many ways, this specific health and well-being test is certainly unlike others we have seen in the past. In other ways, it is having similar results. There is an event that changes the way we look at our everyday lives and leads to a crisis of confidence. That part we have seen many times in our history…and we have always overcome.

First Commonwealth Advisors believes we will do the same with this coronavirus pandemic. The sheer magnitude of the smartest people around the globe with the singular focus of securing a near-term remedy for this specific virus, and ultimately a cure give us that belief. From a financial standpoint, we have seen an unmatched reaction from governments around the globe to battle the economic fallout. Before we look into some of those measures, it is important to acknowledge the damage already done as shown in the table above. We do that and put the numbers in historical perspective, and then we will talk about the path through the other side of this shared struggle.

Perspective is important. The calendar year of 2019 brought an equity market that surprised most with an outsized return of over 31% in the bellwether S&P 500 stock index. We entered 2020 with an economy in the U.S. that was good enough, if not great…and part of an eleven year bull market born from the damage of our last great test from the Great Recession of 2008-09. We were experiencing unprecedented consistent low levels of unemployment in the 3.5% range and the overall economy was chugging along with GDP growth hovering around the 2-2.5% level.

Further, markets continued to climb in January and February as we made an all-time high on February 19th of 3386 on the S&P 500, resulting in a gain of nearly 5% in just a month and a half. The positive momentum started to fade in the last half of the month, and as the table above shows, the bad news accelerated in March as the news and effect of the virus spread. Other than Cash and other safe-haven Treasury securities, just about every asset class was substantially negative. After being down more than 20% during the month, and more than 30% from that February 19th high, the S&P 500 slid over 12%. Smaller-Cap stocks and International Equities slid even more. As is often the case, other asset classes like Fixed Income, Real Estate, and Commodities that usually act as a good portfolio diversifier were hit as well as investors looked to raise cash. In the same way that many were buying last year and into this year when the risk appetite was high, the reverse was true over the last month as most sought to de-risk and pushed the prices of stocks lower around the world.

We know from over 100 years of market data that this mindset, although understood, is fraught with its’ own set of risks. It is why First Commonwealth Advisors always stresses the importance of having a thoughtful asset allocation plan that will benefit you when markets are strong and buffer you when they are not. A traditional 60/40 stock-bond portfolio was up between 16-22% in 2019. The same portfolio is down around 11-15% so far this year. In other words, in most cases investors would still be ahead of where they started 2019. It is certainly not the start to a new year that was hoped for, but perspective is again important.

It is equally important that we point out the Government and Fed response. The Fed, for its part, reduced the Fed funds rate at the beginning of March by .5%, bringing the level down to 1.0%. Then, on March 15, they took the aggressive action of again cutting rates an additional 1%, taking the rate down to an effective 0%. This represented the largest emergency move the Fed has undertaken in its 100 year history. In addition, they announced plans to add liquidity to the markets and be buyers of securities in an "unlimited" fashion. The U.S. Congress passed the CARES legislation in late March, which represents over $2 trillion of additional money for smaller businesses, health care industries and others. In total, there has been pledged over $4 trillion of additional support for the U.S. economy over the last month, representing around 20% of the entire annual GDP of around $20 trillion. It is significant by any measure and additional legislation and directives are already being considered.

We believe it is important to continue to show the graph below of the longer-term performance of the S&P 500. It clearly shows the pain of the dot.com bubble of 2000-2002 and the Great Recession of 2007-2009. It just as clearly shows the resilience of the market after in each case. In price movement alone, we had over a 400% move from the lows in March of 2009 to the highs of February 2020. The recent fall from those highs hurt, but are seen differently through the lens of a long-term view. The problem is that only through the benefit of a rear view mirror are those trouble spots really known, and to reap the rewards of the last eleven years, you had to be invested. 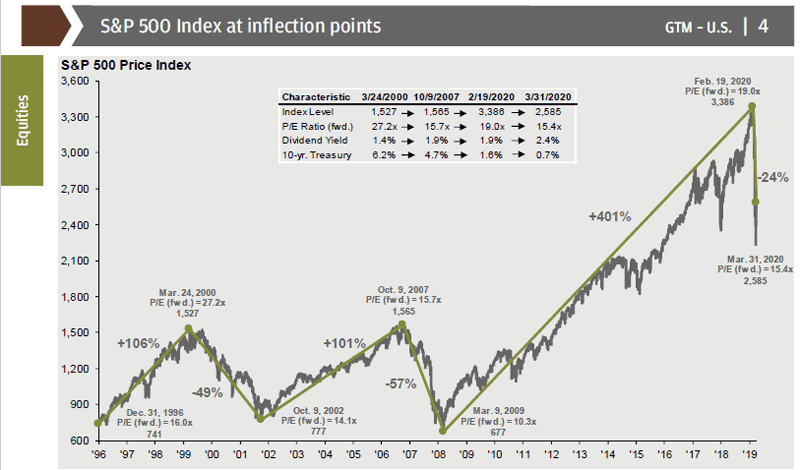 The look ahead is certainly a difficult one. We will not attempt here to even begin to estimate the turn of the health care crisis born from the Covid-19 virus. So much is dependent on how we, as a country, do with our part to help reduce and mitigate the spread of the virus. We are told by our political leaders and top health care officials that the numbers are going to continue to get worse before they get better. Over the last two weeks nearly 10 million Americans filed for unemployment benefits, and there is no reason to expect that trend to diminish quickly, as the overall economy as we knew it has come to a screeching halt. The unemployment rate ticked up to 4.4% as 701,000 Nonfarm jobs were lost in the month of March. There can be no doubt that what we are currently experiencing from a global economic view is unlike anything we have seen before. As we had written in past updates, we have experienced one of the longer bull runs in history from a market and economic standpoint. It has been 11 years since we bottomed out in the S&P 500 in March of 2009 after the Great Recession, which was brought about by the failures of subprime mortgages. Even before the severity of the Covid-19 virus was fully realized, it was likely that an economic recession was going to be showing up sooner than later. It truly has been the nature of the boom and bust cycle of economic expansion that is followed by economic contraction. The chart on the following page tells just that story in looking at the last 70 years. 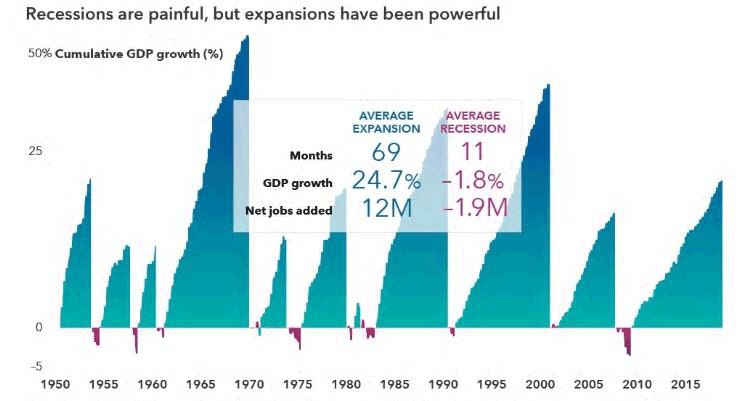 Frequent readers know that we are big on perspective: whether we are talking financial markets, the economy, or even everyday life. The chart above is not meant to minimize the impact that people feel when going through recessions. They are painful and have real-life consequences. However, when viewed through the prism of time, they most often come after a long period of prosperity and good times…and are followed by similar, long periods of overall growth. For varying reasons, at some point the air pressure in the tire gets too inflated and needs to be let out. Typically, as seen above, the pain felt during recessions is dwarfed by the expansion that follows. If only we could fast forward.

We continue to believe that the most important driver for each client’s performance is their overall asset allocation. How much money is allotted to stocks, bonds, cash, etc? If you were investing longer-term assets in a balanced portfolio, for example, there is no reason to believe that allocation should be any different today than it was a month ago. In fact, as that allocation gets out of whack from a big market move like we just experienced, First Commonwealth Advisors manages your portfolio to take advantage of lower-priced asset classes and securities to get that original allocation back in line to meet your long-term goals. Again, taking the balanced allocation example, after a 20% decline in stocks, the stock portion might have gone from the original 50% level down to 45%. We take advantage of those lower stock prices and buy as we reduce the bond holdings to get back to balanced. It is what works best. With the increased volatility experienced in the last several weeks, we have done just that a couple of times already. And when that inevitable turn does happen, client portfolios will be better positioned to perform.

The chart above really demonstrates the importance of staying with your investment objective. It shows the growth of a fully invested $10,000 from 1999 through 2018. It then shows what that same $10,000 would be if you missed the 10, 20, 30 etc. best market days during that same time frame. With just missing the best 10 days over 20 years, your ending dollar amount is cut in half. With every other scenario, you don’t even get back to your initial investment. It is important, and the reality is these really big days are typically clustered around the really bad days. We have seen that play out recently. On March 24th, the S&P 500 gained nearly 10% after being down over 15% the prior three days. We recognize that these can be trying times and the resulting economic fallout is still uncertain. However, in the same way that sellers step in when they believe that prices have gotten ahead of themselves, we believe that buyers will do the same when prices are depressed. They always have. The discount will represent too good of a long-term value…especially versus the absolute low level of cash yields. Finally, First Commonwealth Advisors continues to believe in the resolve of the American people when faced with crisis. Our collective experience has been to band together in tough times…and to overcome. "We Shall Overcome."