Recently I found myself driving in my car listening to a New Year’s countdown of the top 300 songs from the 1970’s. Somewhere in the middle of that countdown was the 1977 Fleetwood Mac song Don’t Stop from their hit album Rumors. The song peaked at #3 on the Billboard Charts, while the album won a Grammy and has gone on to sell over 40 million copies worldwide. What really caught my attention were the lyrics: "don’t stop thinking about tomorrow…don’t stop, it’ll soon be here…it’ll be better than before…yesterday’s gone, yesterday’s gone."

In these uncertain times, that seems like a pretty good anthem to start off 2021. As you can see from the table above, financial markets finished a historical year with a positive December across all asset classes. The S&P 500 doubled what we usually expect from large cap equities, finishing up 18.4% for the year. This came in a year when the world dealt with a global pandemic, historical economic damage and job loss, lockdowns and significant political change. Small cap stocks gave backers their best quarterly return ever, at 31.37%. International equities bounced back strongly as well in the 4th quarter, besting the S&P 500 by over 4%. Core Fixed Income continued to provide positive return, as the Bloomberg Barclays Agg delivered over 7.5% for the year. We talk often of the resiliency of our markets, so we turn to a chart we have shown in the past to illustrate that. Incredibly, even with the nearly 40% slide we had in early 2020, the S&P 500 is up over 400% since the March lows of 2009!

It’s probably worth letting that number sink in for a minute…in just over 11 years, the broad-based index has gone up over fourfold. There have certainly been reasons, as a record amount of stimulus and government aid has acted like a toddler’s security blanket as we recovered from the Great Recession timeframe between 2007-09. Indeed, it was similar stimulus in 2020 that helped stock markets achieve a remarkable bounce from the lows of the first quarter.

The Coronavirus pandemic brought swift damage as countries around the world sought to find ways to stem its spread. Here in the U.S., we shut down entire economies as we dealt with the spread. Over 30 million jobs were lost domestically, and over a third have yet to come back. Well-known companies were forced to close their doors permanently as a result, and many more are still teetering on the brink of solvency. As is often the case with such major upheaval, other industries filled a need and flourished in the painful environment. Zoom and other remote-connecting technology became household technologies as many worked, and children learned from home. Perhaps never before, have our dogs walked as much as they did last year. Many companies attempted to piggyback on the success of (Amazon, Walmart, Target, Netflix) as they found ways to more quickly deliver their products to consumers. Even in the face of substantial challenges and hardships, much good came.

The Fed and the U.S. government acted swiftly to provide relief. Short-term interest rates were taken to near zero in early March and legislation was passed in the form of the CARES Act to provide help for individuals and small businesses. In the case of the Fed, they took unprecedented steps to provide liquidity to troubled markets and became the buyer of last resort for many bond securities. Many have argued about the size and specifics of the aid, but there can be little argument about its short-term effect on the financial markets. It was extremely positive.

The path ahead is littered with many questions. There has been such a stark dichotomy between the very real economic and personal pain experienced by many of our brothers and sisters and the ultimate success in our financial markets. It can seem illogical to comprehend. However, in addition to being resilient, markets tend to be forward-looking. With the promise of vaccines and other therapeutic measures to combat the virus, economies and specific industries have started the recovery process. Two vaccines have been rolled out recently, and the difficult job of administering them to the masses has begun. There is much hope that this breakthrough will return some sense of normalcy as we progress into 2021. We agree that the continued effort on that front should help.

We tend to be more in the glass half-full camp in general…it’s just easier. However, we are also pragmatic and always strive to stay grounded from learned experiences. One of those, is that outperformance tends to lead to underperformance and vice versa over time…the reversion to the mean. As we look forward, we do so with both a shorter and longer-term perspective. In the short-term, we remain optimistic for all of the reasons outlined. There is general agreement that with the incoming Biden administration here in the states, additional economic stimulus is likely. That should provide some additional tailwinds to stocks as investors continue their search for yield. In the longer-term, we worry that in order to maintain these lofty valuations, much like Goldilocks, many economic indicators and individual stock fundamentals will have to be "just right."

The graph below shows a long-term look at the S&P 500 with a regression line through it to compare where we are versus the "norm."

We won’t get into any regression-speak, but rather talk about the simplistic use of a graph like this. When you are significantly under the long-term regression line, the S&P 500 tends to rally back, or revert to the mean…and when you are significantly above that line, it tends fall back. At the end of December, we were about 154% above that trend line. That represents the biggest gap we have seen over the last 140 years. Again, it is important to note that this type of research is not meant to be any type of short-term market indicator. We have seen many times in our recent past when markets have continued to rally well past traditional valuation metrics. That was certainly the case in the dot.com years of the late 1990’s when stock markets climbed two years after Alan Greenspan first spoke of "irrational exuberance." Even in the more recent market rally preceding the Great Recession timeframe of 2007-09, markets frustrated the bears with new increasing new highs before the ultimate decline.

Simply put, it may be likely that the next 10-11 years produce equity returns that are less than what we have seen over the preceding 11 years. How and when some of the out there start to affect actual performance is extremely difficult to gage. However, we do believe that there are some real issues that markets will have to navigate. The dramatic increase in the size of the Fed balance sheet is problematic. The government has printed a lot of new money with the various stimulus measures. The size of the U.S deficit continues to grow leading to pressure on the dollar. Inflation, although muted currently could rear its ugly head. Many of these potential red flags will bear watching, and much will depend on the economic vision of the new administration, in addition to other factors out of their control. 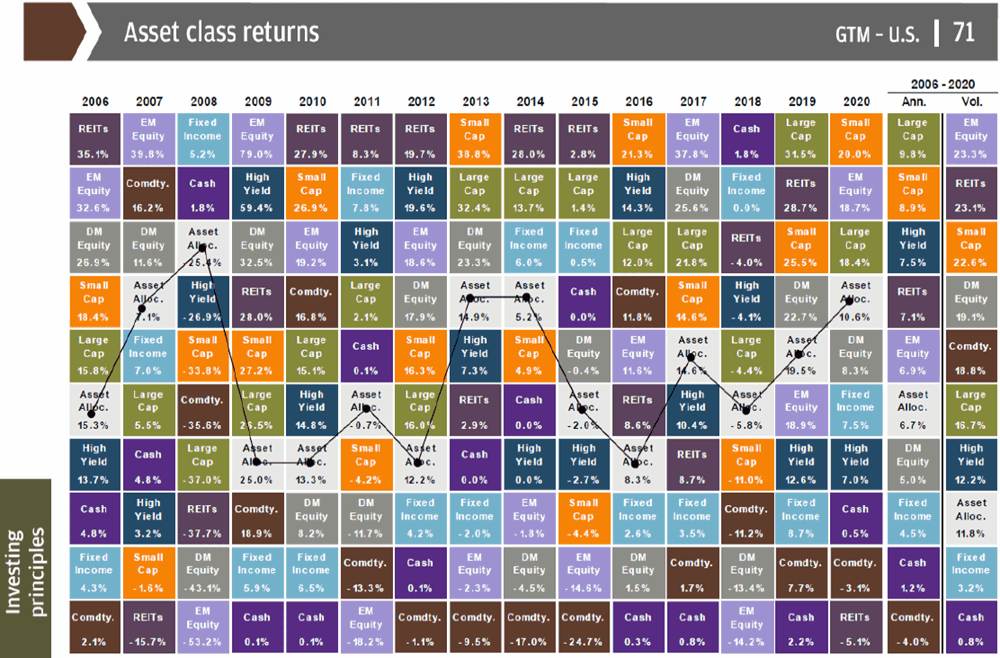 Finally, we end with colorful asset class return table shown above. We believe that when looking forward, it is important to know where you are coming from. You can see that last year saw a resurgence in U.S. Small-cap and Emerging Market stocks. Specifically, it really shows the importance of building a thoughtful, diversified asset class investment portfolio, as different asset classes weave in and out as top and bottom performers in any given calendar year.

We believe that International equities have a chance outperform Large-Cap domestic over the next couple of years, as they have lagged more recently. If there are inflationary pressures, commodities could return to the top of the leaderboard. With change, comes opportunity, and we have already seen companies pivot from prior blueprints as they attempt to navigate the ever-changing economic landscape. Those that can quickly adapt will be more successful and will continue to see new technologies pave the way…as we always have. It will be perhaps more important than ever to have that diversified portfolio, and to actively manage it as markets rally and fall. But, we will never stop…thinking about tomorrow. Yesterday is indeed gone, and we will always hope that tomorrow will be better than before.